In the “Notice sur l’Héliographie” Niépce describes his procedure in detail:

“I call the discovery that is the subject of this book heliography. It is due to the observation of a phenomenon of light which has hitherto received little attention. It is the fruit of several years of research on the solution of an equally interesting and curious question, which derives from it that of searching in the emanations of luminous fluid an agent capable of imprinting in an accurate and permanent manner the images transmitted by the processes of optics; of imprinting, I say, not with the brightness and variety of its colours, but with all the gradations of tones from black to white. (…)

I half-fill a glass with this powdered asphalt. I pour lavender oil over it drop by drop until the bitumen no longer absorbs and only penetrates well. Then I add enough of this essence oil to float about three strokes above the mixture, which must be covered and subjected to a gentle heat until the added essence is saturated with the colouring matter of the bitumen. If this varnish does not have the necessary consistency, it is left to evaporate in a capsule in the open air to protect it from the humidity which alters and eventually decomposes it. This disadvantage is especially to be feared in this cold and damp season, for experiments in the darkroom. A small quantity of this varnish is applied cold with a very soft skin pad to a well-polished silver plate, giving it a beautiful vermilion colour, and is applied in a very thin and even layer. The plate is then placed on a hot iron covered with a few duplicates of paper from which all moisture has been previously removed; and when the varnish has ceased to adhere, the plate is removed to be allowed to cool and finish drying at a gentle temperature, away from contact with damp air. In this context, I must not forget to point out that this precaution is indispensable, especially when applying the lacquer. In this case, a light disc, with a short stick fixed in the middle of it, held in the mouth, is sufficient to stop and condense the moisture of the breath.” 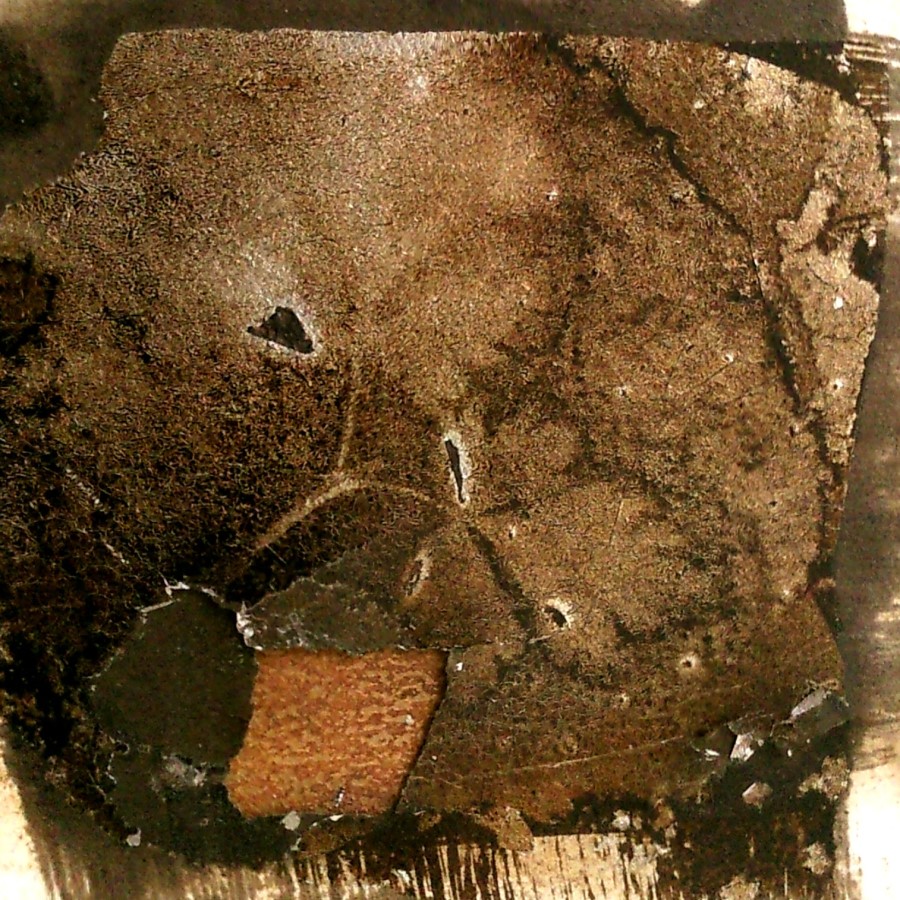 For his first experiments, Niépce positioned paper on the back of a camera obscura. These were coated with silver salts. At that time, it was already known that silver salts (silver chloride) change when exposed to light. In May 1816, he produced the first photograph of nature: a view from the window. It was a picture in negative and not durable. After opening the camera, the exposure process continued and the image blackened until it disappeared completely. Niépce called this process “retina”. The recording technique from the project is also based on this process: THE 7th DAY.

In March 1817, Niépce focused his attention on guaiac resin. This yellow resin changes colour in sunlight and is also not soluble in alcohol. Now Niépce could make permanent photographs. However, one problem with the glass lenses used for the camera obscura at the time was that they filtered UV light. This part of the light spectrum, however, is essential to change the properties of the guaiac resin. Contact prints in direct sunlight were feasible, but not photographs with a camera obscura.

Disappointed, Niépce turned to other substances. A natural asphalt, also known as “Bitume de Judée”, received special attention. In France, the tough, black-brown mineral was extracted from the Mine du Parc. The finely powdered natural asphalt is dissolved in lavender oil and applied to a metal plate, stone or glass plate. After drying, the coated material can be exposed to light. In sunlight, the exposure time for contact prints is several hours. In a camera obscura, the exposure takes several days. Depending on the amount of light, the asphalt hardens to different degrees. After exposure, the areas that remained soft (to which less light reached) are washed out with a mixture of lavender oil and white oil. In his “Notice sur l’Héliographie” Niépce describes the procedure in detail

Here you will find asphalt works (Héliographien) by Przemek Zajfert, produced in a process developed by Joseph Nicéphore Niépce in 1822 to 1826/27. Each work is unique and through the imperfection of the technique, chance creates its own interpretation of reality. https://heliographie.art/ 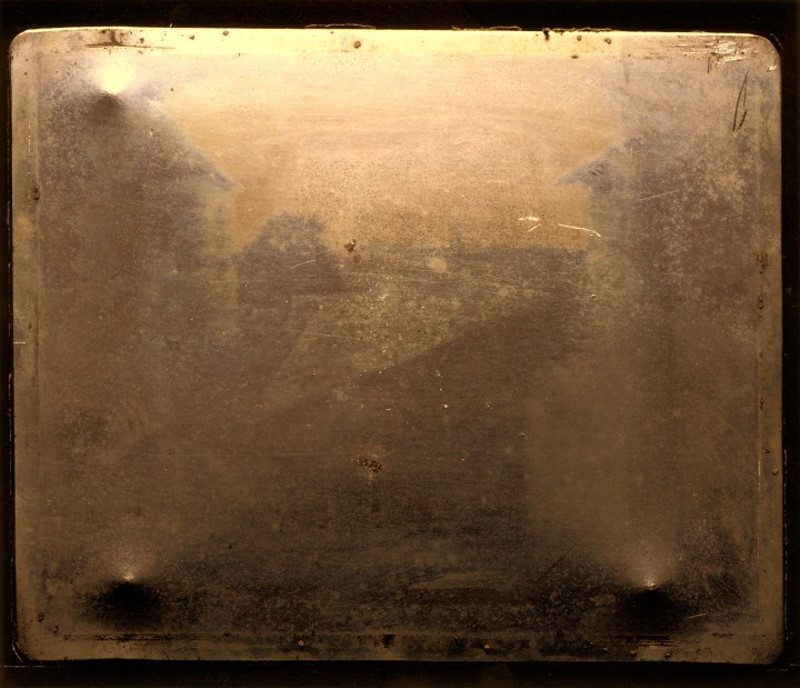 Work table for the production of heliographs in the studio of Przemek Zajfert. 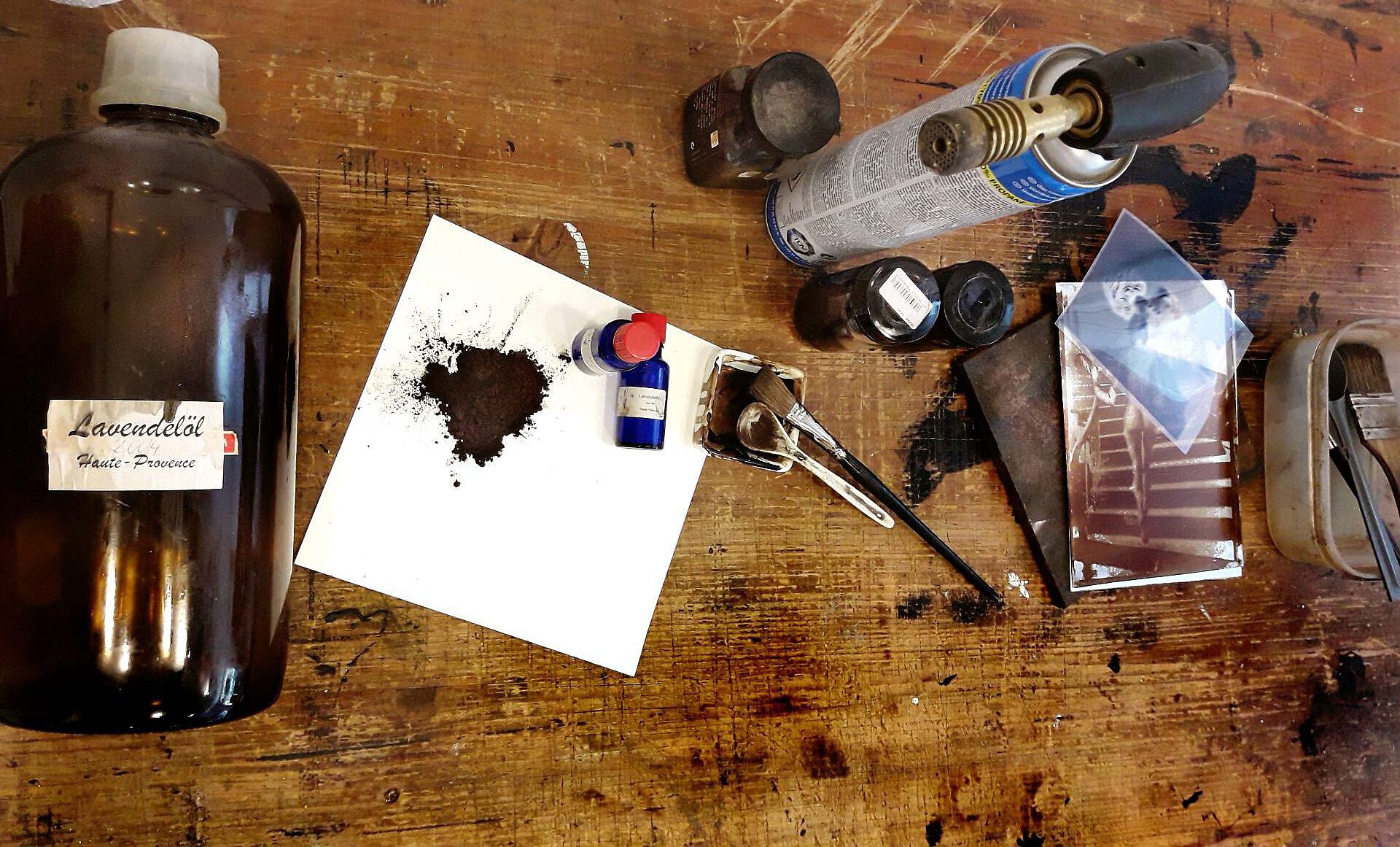 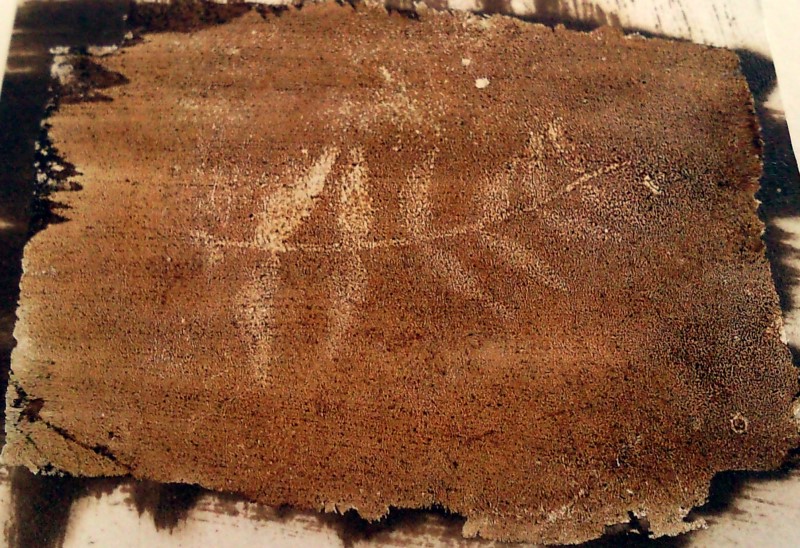 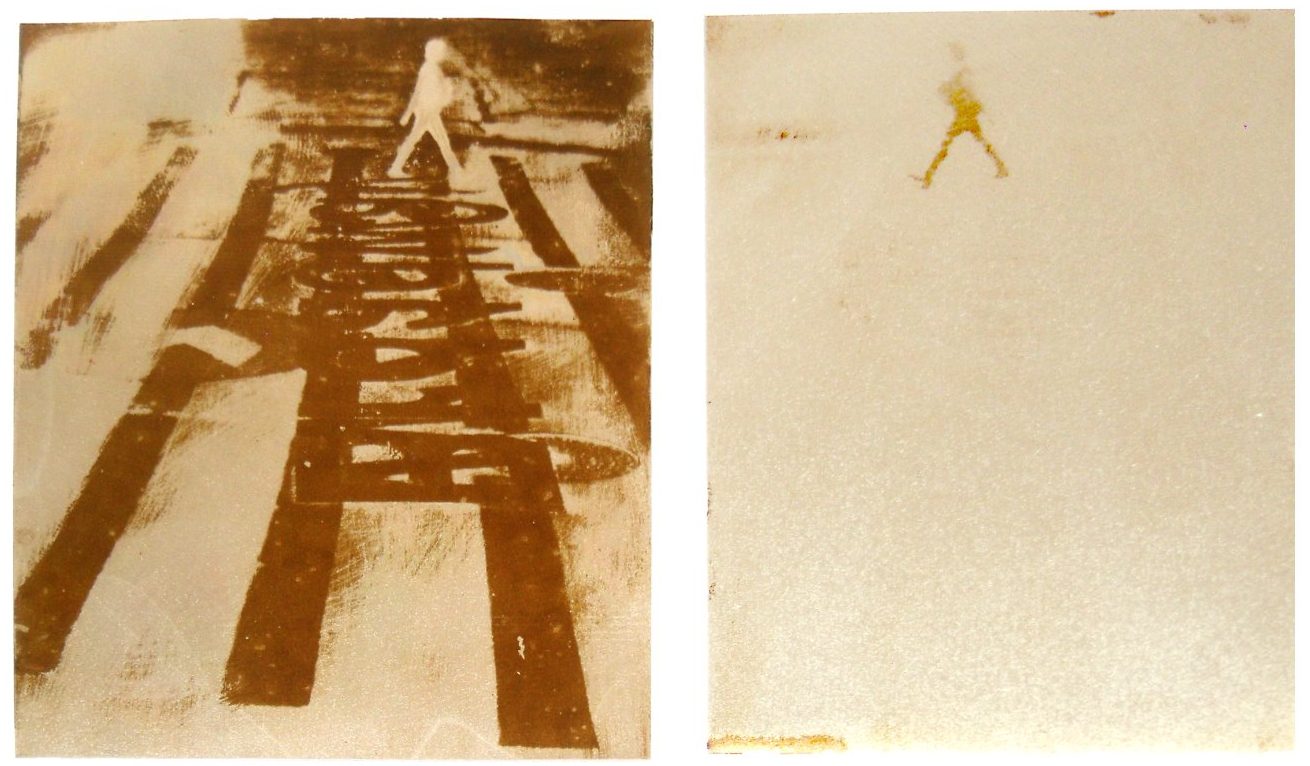 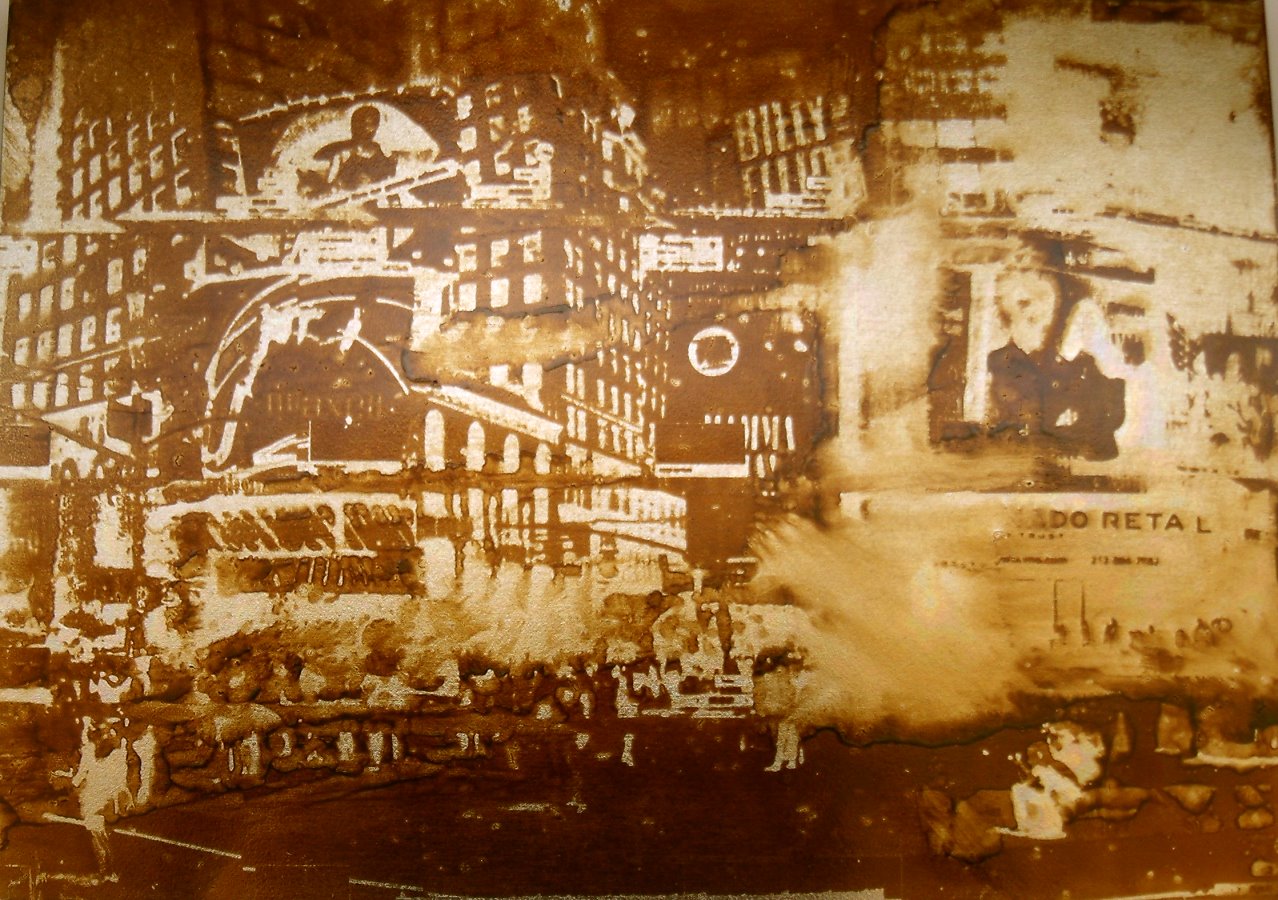 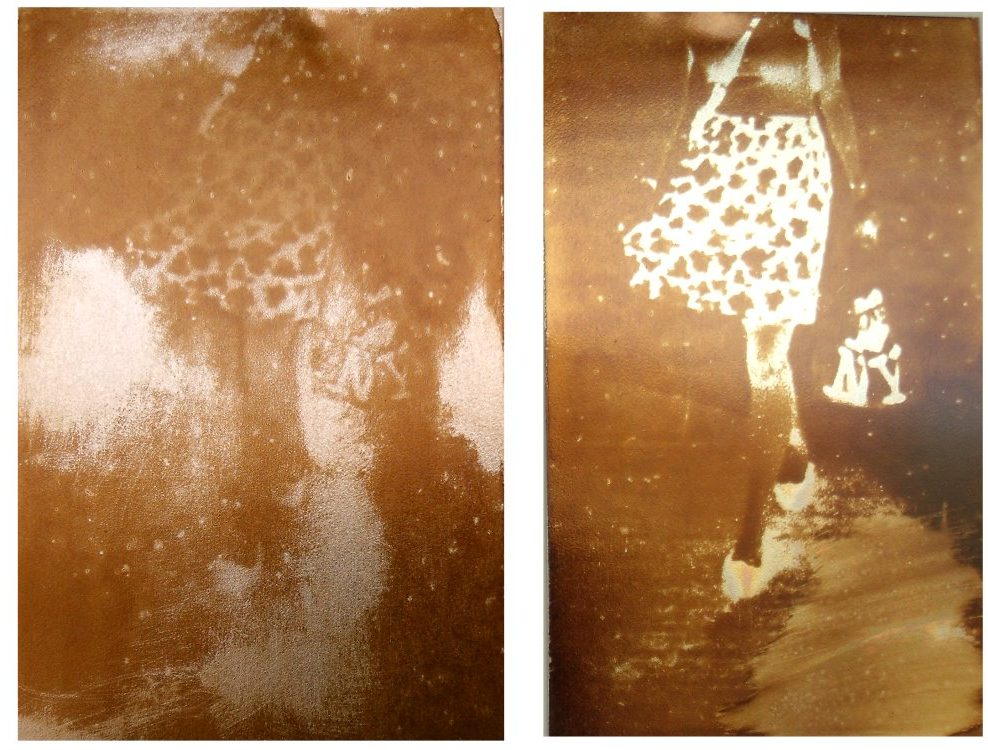 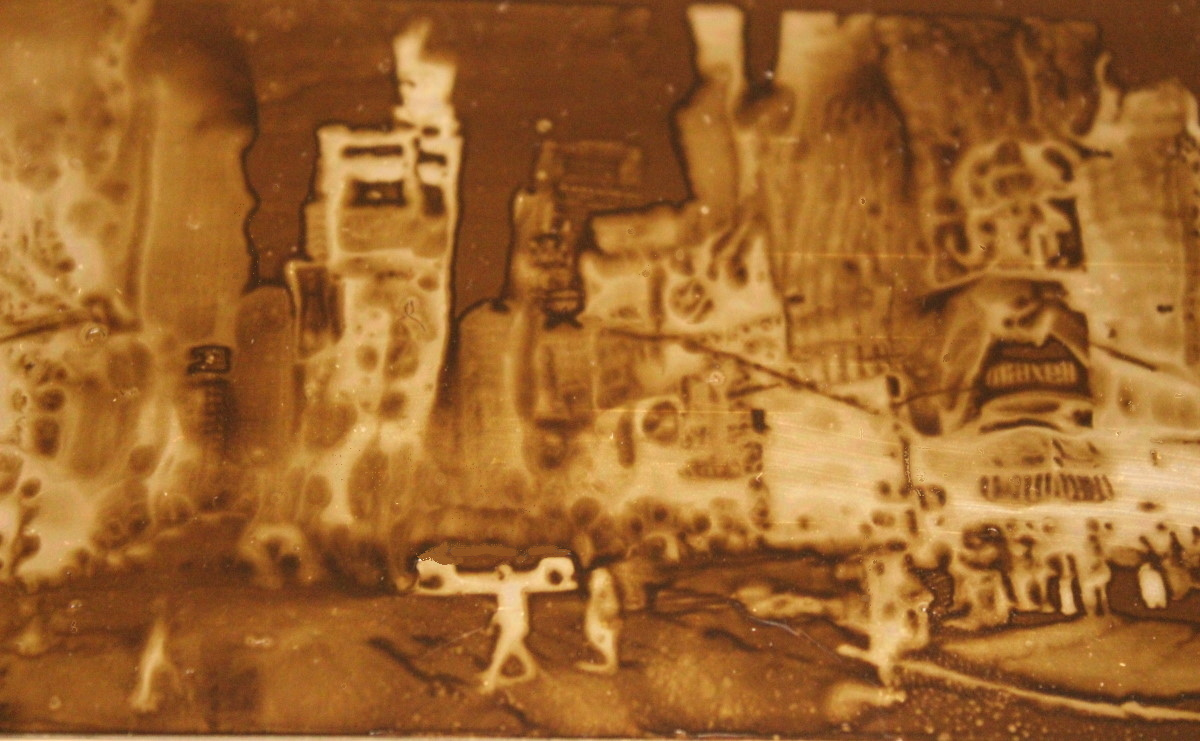