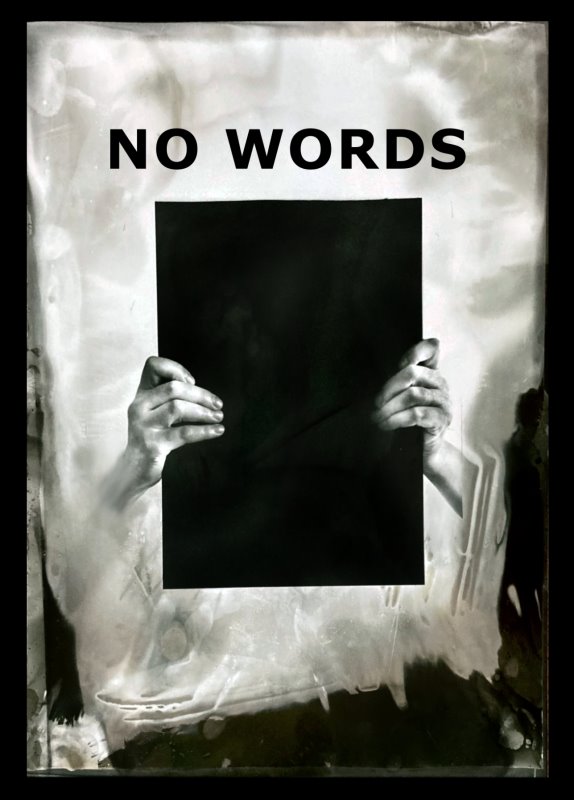 On Thursday, 24 February 2022, the world looked at me with dark eyes. The reality of the totalitarian system from which I had fled in the 1980s caught up with me and showed its true face. On that Thursday, I was overwhelmed by powerlessness, shame, hatred and also the futility of artistic creation.
An incident from Nizhniy Novgorod shows how brutal and at the same time grotesque totalitarian systems are. A young woman holding a white, blank piece of paper in a public square is arrested by two policemen.

For those who have overcome their fear, liberated their spirit and stood up to the autocrats, liars and despots of this world, this project is dedicated.

In March, I photographed Mihaela’s hands with a blank sheet of paper, and printed a 13 x 18 cm negative.
In the basement, in a sparsely furnished darkroom, I began to expose the same motif on old photographic paper seemingly endlessly.
Red light and monotonous electronic music in the background, a bunker atmosphere that is both threatening and protective

I count the days and paint the numbers with a brush soaked in fixative on the exposed but not yet developed photographic paper. A daily photographic ritual.

Like a shaman, I drive away all shame, helplessness and hatred in this ritual photographic process of constantly repeating exposures of the same negative: women’s hands holding a blank sheet of paper. A gesture of protest, a symbol for all protests.

Sometimes during development I expose the photographic papers to white light, which produces the effect of solarisation.

The positive becomes a negative in places

The images are only watered very briefly, but NOT fixed enough. Therefore, the process of “destruction” begins immediately after the photo is taken. The image, under the influence of light, changes permanently, randomly and irreversibly over the years. The scans made of the individual images reflect the state of the photo immediately after its creation.